Interview with Johnnie Alexander & spotlight of Match You Like Crazy... 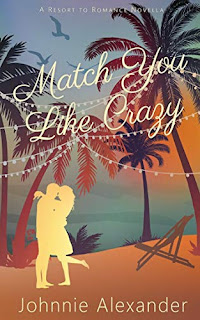 We're happy to have Johnnie Alexander with us today talking about her book Match You Like Crazy. To learn more about Johnnie and her book, read on!

Back cover blurb
They have everything in common. So why aren’t they a perfect match?

Bre Fisher wishes she’d said no when her grandmother gave her a trip to Matchmaking Week, especially when Nate Hunter takes the seat beside her on the puddle-jumper to Joy Island. He’s the last person she expected to see.

Nate figures he can’t go home if Bre is his match. The longstanding business rivalry between their families makes romance with a Fisher impossible.

Yet in addition to the same family expectations and obligations, Bre and Nate have the same interests ~ maybe even the same dream.

Will a week on Joy Island spark another feud? Or prove they’re a crazy perfect match?

FIRST PAGE
“Match You Like Crazy”
Resort to Romance Series

For the hundredth time since Bre had arrived at the oceanside airport, she wished she had paid more attention when Gran asked if she wanted to take a plane or a boat to Joy Island. The plane seemed the obvious choice since the flight didn’t depart till three. The boat had left the dock at ten that morning. Way too early!

By choosing to fly, she’d had plenty of time to make the drive from her Tampa home to the private airport located along Miami’s southeastern seaboard.

She prayed she wouldn’t vomit as she maneuvered the narrow aisle on her way to Seat L-1 near the back of the small plane.

Gran had suggested as much when she printed out the ticket and stuffed it in the packet with Bre’s other travel documents. Her gray eyes had sparkled with a mischievous glint. Bre should have summoned the courage to say no.

No to the plane. No to Joy Island. No to the whole matchmaking scheme.

Yet here she was, entrusting her life to a flying tin can to make her grandmother happy. But she refused to sit in a window seat no matter what it said on her ticket.

Each row held three seats—two on the right side of the aisle and one on the left. Row L was empty, and Bre gratefully dropped into L-2, the only seat that wasn’t next to a window. Perhaps L also stood for Luck and no one else had been assigned to the row.

She stowed her tote then opened the texting app on her phone to send a quick “I’m on board” message to Gran and her parents.

Bre looked up at the man hovering above her. And gasped. It couldn’t be. Not him.

Recognition dawned in his eyes, and a slow smile curved his lips.

“I’m L-1. It’s just that . . .” Bre gazed toward the window. Outside the plane, palm trees waved their fronds in beat with the tropical breezes wafting from the Atlantic Ocean. The sun shone bright and hot in a perfect blue sky dotted with perfect white clouds. A tranquil picturesque scene if you overlooked the concrete of the tarmac.

But to be among those clouds in that perfect blue? Bre gagged at the thought.

“How about I take the window seat?” Nate offered. “You look a little tense.”

“Thank you.” Bre stood so he could squeeze past her. She’d imagined this day getting worse before it got better but sitting beside Nate Hunter for the duration of the flight was the worst of the worst. Unless she did vomit. She shuddered at the thought of that humiliation.

Please tell us five random things we might not know about you.
1.     My birthday is in a couple weeks!
2.     Captain America is my favorite Avenger.
3.     I traveled through Europe with a penguin travel pillow.
4.     My mom lost the crest on her class ring, so she had it polished and gave it to me when I was thirteen. I’ve been wearing it ever since.
5.     I took my kids out of school for Trilogy Tuesday—when theaters showed all three of the Lord of the Ring movies.

Why did you choose to write this book?
Authors Jill Kemerer and Jessica Patch created the series and asked me to write one of the ten novellas. The concept—ten couples spending Matchmaking Week on a Bahama island owned by two eccentric and wealthy sisters—sounded so fun that I immediately said yes. All the stories in the Resort to Romance Series have the word “Match” in the title.

What do you hope readers to take away from your novel?
This is a light-hearted romance which I hope readers will simply enjoy—an escape from the to-do list to a romantic tropical island. The main characters, Nate and Bre, work in their individual family businesses but they both have an adventurous dream. It’s a story of reconciliation and following one’s heart.

What is something you hope to achieve, writing-related or not?
I’d like to write a screenplay based on a short story that was published in an anthology. And though I don’t expect to ever have the opportunity, I’d love to be a director’s VIP guest on a movie set.

What do you do for fun when you finish a writing project?
Start on the next one!
However, I also enjoy going to the movies, browsing the shelves of my local library, taking walks, and curling up on the couch with a good book.

What are you working on now?
I’m writing “Blue Moon,” a WWII novella for Barbour’s Hometown Heroines Collection. My heroine, a member of the Women Officers of Public Safety unit, teams up with an Army Intelligence agent to protect a top-secret atom bomb facility from sabotage.

Bio
Johnnie Alexander creates characters you want to meet and imagines stories you won't forget. Her award-winning debut novel, Where Treasure Hides, is a CBA bestseller. She writes contemporaries, historicals, and cozy mysteries, serves on the executive boards of Serious Writer, Inc. and the Mid-South Christian Writers Conference, co-hosts an online show called Writers Chat, and interviews inspirational authors for Novelists Unwind. She also teaches at writers conferences and for Serious Writer Academy. Johnnie lives in Oklahoma with Griff, her happy-go-lucky collie, and Rugby, her raccoon-treeing papillon. Connect with her at www.johnnie-alexander.com and other social media sites via https://linktr.ee/johnniealexndr.
Where else can readers find you online?
My monthly newsletter provides fun updates and giveaways. Please sign up at http://johnnie-alexander.com. Connect with me on other social media sites via LinkTree.
- May 01, 2019 1 comment: Links to this post