Interview with Pat Jeanne Davis and spotlight of When Valleys Bloom Again... 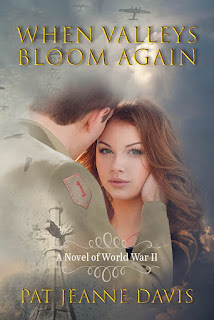 We're happy to have Pat Jeanne Davis with us today discussing her inspirational historical novel When Valleys Bloom Again.


When Valleys Bloom Again
Inspirational Historical Romance
As war approaches in 1939 Abby Stapleton’s safety is under threat. Her father, a British diplomat, insists she go back to America until the danger passes. Abby vows to return to her home in London—but where is home? With her family facing mortal danger so far away and feeling herself isolated, she finds it hard to pray or read the Bible. Did she leave God behind in war-torn London too? Abby becomes friendly with Jim, a gardener on her uncle’s estate.

Jim can’t get Abby out of his mind. Did she have a sweetheart in England? Was it foolish to think she’d consider him? He curses his poverty and the disgrace of his father’s desertion and drunkenness haunts him. Can he learn to believe in love for a lifetime and to hope for a happy marriage?

Abby couldn’t know the war would last a long time, nor that she would fall in love with Jim—soon to be drafted by the U.S. Army—or that she’d have to confront Henri, a rejected suitor, determined by his lies to ruin her reputation and destroy her faith in God’s providence. Will she discover the true meaning of home and find happiness with Jim?

Please give us the first page of the book.

Abby Stapleton slumped back in her seat, any glimmer of hope she’d harbored would soon be extinguished. A crystal chandelier jingled in the draft of an open window. She loved this room with its embossed wallpaper and rich tapestries, vibrant with memories of family. How could she leave all this?
Her father folded the newspaper with its glaring headlines, plopped it on the table and parted his lips to speak. Abby forestalled him. “I’m nineteen,” she said, her nerves rubbed raw by the endless squabbles with her parents. Speak low and slow, Abby. “I don’t w-w-want to go.” Her voice, thin and strained, echoed back from the high frescoed ceiling.
“A father can’t ignore his responsibilities,” he said, clasping her hand. “You know Hitler’s taken Austria and Czechoslovakia. Probably he’ll take Poland next.” He furrowed his brow. “And when that happens war with Germany will be unavoidable.” His hand shook, and he sounded as though he’d aged ten years in the space of a few minutes.
Sunlight dispersed through a bay window, washing the brocaded settee on which she and her mother sat with patches of red and gold. Her mother sidled closer and stroked Abby’s arm, her face taut and pale. “Do as your father says, dear. There are sandbags and barrage balloons everywhere, and gas masks are being handed out.”
Still determined to speak her mind before it was too late, Abby shut her eyes in a silent prayer. Lord, help me to keep my temper. She released her hand from her father’s. “I sh-sh-should be able to decide for myself w-w-whether I want to leave.” Now of all times when she needed eloquence, this accursed stammer bound her up tight. 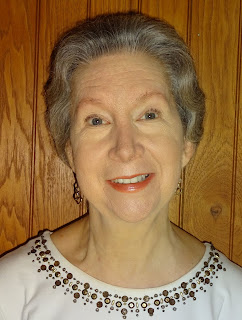 Why did you choose to write this book?
I have family in the US that served in the European Theater during WWII. When war was declared by England in 1939, my father-in-law was conscripted into the British Eight Army and served his country until 1946. I’ve had a keen interest in this period of history and hoped to some day write a faith based novel with an Anglo-American connection set during those dark days of the war.

As the ranks of those who lived through this period get smaller, I desired to highlight their lives in an instructive and entertaining way. When Valleys Bloom Again unfolds through the eyes of Abby Stapleton from an estate on Philadelphia’s Main Line with its landscaped gardens, to the bombed-out inner-city and suburbs of London to the battlefield in North Africa and Normandy. Military and history buffs will appreciate the references to battles and hardships faced by soldiers.

What do you hope readers to take away from your novel?
That through all of  life’s experiences with faith in God and submission to His will, we can be hopeful and steadfast in purpose, trusting in the promise from Him that all things work together for
good.

BIO:
PAT JEANNE DAVIS lives in Philadelphia, Pa with her British-born husband, John. They have two grown sons. She enjoys flower gardening, genealogy research and traveling with her husband. Pat has published essays, short stories and articles online and in print. She has a keen interest in twentieth-century American and British history, particularly the period of World War II. Pat’s father-in-law served in the British Eighth Army during the war. When Valleys Bloom Again is her debut historical romance set in that era. She is a member of the American Christian Fiction Writers and the Historical Novel Society. Pat loves to hear from her readers. Subscribe to her newsletter here www.patjeannedavis.com