Interview with Johnnie Alexander & spotlight of Where Treasure Hides! 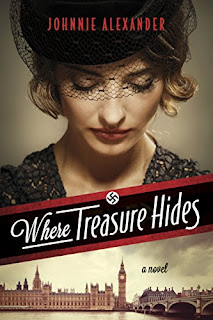 We're excited to have Johnnie Alexander with us today talking about her WWII novel Where Treasure Hides. I absolutely love the cover. Gorgeous! To learn more about Johnnie and her novel, read on!

Please tell us five random things we might not know about you.
1.     I have the same Christmas stocking I had when I was a baby. Each year I get fuzzy socks, Twizzlers, and other surprises.
2.     When I was a teen, I raised three puppies who became guide dogs.
3.     I’ve lived in three different states in the past three years.
4.     My favorite soda is Pepsi with lemon and lots of ice.
5.     My Pontiac Vibe, which I bought new ten years ago, has over 180,000 miles on the odometer. I’ve driven it in more than 20 states and in Washington, DC. My grandsons call it the Alpaca Squadmobile. I love that car.

Why did you choose to write this book?
World War II history fascinates me—so many stories, so much tragedy and drama and courage. After watching a DVD about Hitler’s looting of Europe’s treasures and another about the horrific plight of children during the war, I knew I wanted to join these two themes together in one story. Brave people hid art and brave people hid children. The heroine of Where Treasure Hides does both but the art she hides is very personal to her.

What one thing about writing do you wish non-writers would understand?
The non-writing members of my family often comment on how real these people I make up in my head become to me. They find that both fascinating and amusing!

What is the toughest test you've faced as a writer?
On a couple of occasions, I thought my writing career was over. That discouragement is hard to overcome. But new opportunities appeared each time. It’s not an easy journey, and it tests one’s patience and persistence. I’ve learned not to give up and to be open to God’s plan for me.

What do you hope readers to take away from your novel?
Legacy is so important—what we are given from our parents and grandparents and what we choose to give to our children. But material things aren’t nearly as important as a spiritual heritage. Proverbs 31:25 encourages us to clothe ourselves in strength and dignity and to “smile at the future.” This can be hard when faced with difficulties and heartache. But it’s a promise that our future, our eternal future, is bright and holy and joyous.

What accomplishment(s) are you most proud of, writing-related or not?
I’m blessed that my three children are amazing adults who love God. It’s a joy to see them passing along the values that are meaningful to me, such as the importance of creating memories for each other, to their own children.

What do you do for fun when not writing?
Like most writers, I love to read. I also enjoy traveling with my sister. In the last three years, we’ve traveled to Prince Edward Island, to Europe (where we traveled by train from one major city to another before spending a few days in Lisbon), and most recently on a cruise up the New England coast and into Canada. It’s become an annual tradition I hope we continue.

What are you working on now?
I’m doing the final edits for a novella called “Match You Like Crazy,” which is the tenth story in the Resort to Romance Series. And I’m just getting started on my fourth novel with Annie’s Fiction which will be part of their new Inn at Magnolia Harbor series.

Where else can readers find you online?
My monthly newsletter provides fun updates and giveaways. Please sign up at http://johnnie-alexander.com. Connect with me on other social media sites via LinkTree.

Back cover blurb
Artist Alison Schuyler spends her time working in her family’s renowned art gallery, determined to avoid the curse that has followed the Schuyler clan from the Netherlands to America and back again. She’s certain that true love will only lead to tragedy—that is, until a chance meeting at Waterloo station brings Ian Devlin into her life.

Drawn to the bold and compassionate British Army captain, Alison begins to question her fear of love as World War II breaks out, separating the two and drawing each into their own battles. While Ian fights for freedom on the battlefield, Alison works with the Dutch Underground to find a safe haven for Jewish children and priceless pieces of art alike. But safety is a luxury war does not allow.

As time, war, and human will struggle to keep them apart, will Alison and Ian have the faith to fight for their love, or is it their fate to be separated forever?

Please give us the first page of the book.
Where Treasure Hides

The stringed notes of “Rule, Britannia!” grew louder as the crowd quieted, eyes and ears straining in their search for the violin soloist. The patriotic anthem echoed through Waterloo Station’s concourse, and as the second chorus began, sporadic voices sang the lyrics. Travel- weary Brits stood a little straighter, chins lifted, as the violinist completed the impromptu performance, the last note sounding long after the strings were silenced.

Alison Schuyler gripped her leather bag and threaded her way through the crowd toward the source of the music. As the final note faded inside the hushed terminal, she squeezed between a sailor and his girl, murmuring an apology at forc­ing them to part, and stepped onto a bench to see over the crowd. A dark-haired boy, no more than seven or eight, held the violin close to his anemic frame. His jacket, made of a finely woven cloth, hung loosely on his thin shoulders. The matching trousers would have slipped down his hips if not for his hand-tooled leather belt.

Either the boy had lost weight or his parents had purposely provided him clothes to grow into. Alison hoped for the latter, though from the rumors she’d heard, her first assumption was all too likely. She stared at the cardboard square, secured by a thick length of twine, that the boy wore as a cheap necklace. The penciled writing on the square numbered the boy as 127.

Other children crowded near the young musician, each one dressed in their fine traveling clothes, each one labeled with cardboard and twine. Germany’s castaways, transported to England for their own safety while their desperate parents paced the floors at home and vainly wished for an end to these troublesome days.

“Now will you allow him to keep his violin?” A man’s voice, pleasant but firm, broke the spell cast over the station. The children fidgeted and a low murmur rumbled through the crowd. The speaker, dressed in the khaki uniform of a British Army officer, ignored them, his gaze intent on the railroad official overseeing the children.

“He better,” said a woman standing near Alison. “Never heard anything so lovely. And the lad not even one of the king’s subjects. I’d take him home myself—yes, I would—if I’d a bed to spare.”

Alison mentally sketched the tableau before her, pinning the details into her memory. The officer’s hand resting on the boy’s shoulder; the official, a whistle around his neck, restlessly tapping his clipboard with his pencil; the dread and hope in the boy’s eyes as he clutched his prized instrument. The jagged square that tagged his identity.

Bio
Johnnie Alexander creates characters you want to meet and imagines stories you won't forget. Her award-winning debut novel, Where Treasure Hides, is a CBA bestseller. She writes contemporaries, historicals, and cozy mysteries, serves on the executive boards of Serious Writer, Inc. and the Mid-South Christian Writers Conference, co-hosts an online show called Writers Chat, and interviews inspirational authors for Novelists Unwind. She also teaches at writers conferences and for Serious Writer Academy. Johnnie lives in Oklahoma with Griff, her happy-go-lucky collie, and Rugby, her raccoon-treeing papillon. Connect with her at www.johnnie-alexander.com and other social media sites via https://linktr.ee/johnniealexndr.