Dorothy Featherling's "It Adds Up to Murder" 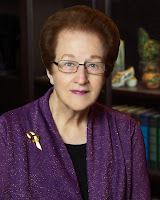 Title: It Adds Up to Murder (Book 1 of series “It’s Murder at the Office”)

Cover blurb: Abigail Newhouse is forced to work temporary jobs to make ends meet. She discovers that while the jobs can be murderous, there aren’t usually dead bodies involved. Abby isn’t expecting crime at her first long term assignment, but when it occurs, she wants to help. Will Homicide Lieutenant Nick Vaughn believe that – or is she his main suspect? Abby soon finds sleuthing has placed her in deadly peril when she finally confronts a merciless killer face-to-face.

How did this story come to you?
My last ‘real’ job was as the administrator of a physics research center at a major university. I was trying to come up with an idea for a mystery (I just wanted to see if I could write one – I write in multiple genres and had never tried a mystery) so the thought came to me…what would happen if someone had a supposedly secure job, but then lost it through no fault of her own? I couldn’t remember ever reading a book of any kind that featured a temporary worker so I thought that was an original twist and left the door wide open for sequels. I decided to make Abby take temporary jobs and then have to face the issue of every time she changed jobs, she got involved in another murder? I decided a logical hero was a police detective and Nick Vaughn was created. Their relationship would develop throughout the series as well. Book 2 will be started soon and I’ve found I LOVE writing mysteries!

Tell us about the journey to getting this book published.
My journey to publication has taken a while. I began writing about 10-12 years ago and at first went through all the throes that a beginning writer does. I read, attended seminars and conferences, etc., essentially tried to learn the craft. Some family issues and health issues intervened after a couple of years and the writing went on the back burner. Several years ago I decided to have my own home staging business and I’ve done that for more than four years. Just recently, I decided to go back more to the writing since that’s always been my passion and have been working on that since. For me self-publishing seemed the most logical way to go due to having limited time available and I’ve done that and am pleased to have two books published and a third ready for publication.

Tell me three things about yourself that would surprise your readers.
I’ve written seven novels and am publishing them one at a time, in multiple genres.
I won a national award for writing in a mystery suspense category in 2007.
I still enjoy re-reading some of my favorite “children’s” books like “The Lost Prince,” “The Little Princess,” “Swiss Family Robinson and have copies on my bookshelves.”

What are you working on now and what's next for you?
Right now, I’m about ¾ through with my second mystery series “Staged for Murder.” I hope to have it published in the fall. It’s about a home stager who keeps running into murder in houses she stages. Working title is: “Murder Outside the Box.”

Parting comments?
Since I love writing humor (several of my romantic comedies and a novella are humorous in nature), I hope to incorporate that at some point more in a mystery series. I strive to do things differently…not give readers the same plots, twists, and expectations as everyone else in a genre. Hopefully, I can keep that up.

Where can fans find you on the internet?
My author website is: www.dafeatherling.com
I also have a Facebook author page”  https://www.facebook.com/D.A.Featherling