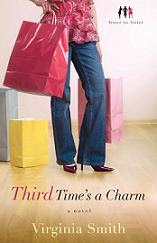 We're happy to have Virginia Smith with us talking about her book "Third Time's a Charm."

1) How did this story come to you?
Since Third Time’s a Charm is the third in a series, I knew the character’s overall goal and internal conflict, because they were the same ones shared by her sisters in the first two books. But the plot came from a series of conversations with people who have experience as marketing research analysts, which is the main character’s occupation. As I asked questions about the job, and about the advertising industry, I got different ideas from each of them. It was fun watching all the pieces come together into a story.

2) Tell us about the journey to getting this book published.
I got the idea to write a series of books based on three southern sisters as I was driving from Kentucky to Denver for my first International Christian Retail Show in the summer of 2005. Since I’m the oldest of three sisters, I had a lot of personal material to draw on! The contract from Revell came in early 2006. It was my third book contract, following Just As I Am and Murder by Mushroom, and the first multi-book contract I’d ever received.

3) Tell me three things about yourself that would surprise your readers.
Number One: I never wanted to be a writer as a child. Instead, I wanted to be a judge from the time I was selected for the role of Judge Jezabell Justice for a mock trial in my 7th grade history class.

Number Two: I’m a singer and have recorded four CDs, three with a contemporary Christian group and one solo CD. (And I still have some of those available, if anyone likes hymns!)

Number Three: I was a smoker for thirteen years, and quit in 1990 (twenty years ago!) as a New Year’s resolution. In fact, back in the 80’s when people still smoked in buildings, I smoked so heavily that when I left that company, my office had to sit empty for three months before anyone could stand to move in there.

4) What are you working on now and what's next for you?
I’ve got two more books coming out this year. A Daughter’s Legacy is a romance novel set in a zoo. It will be released from Steeple Hill in May. And I just finished writing Into the Deep, a romantic suspense novel also coming out from Steeple Hill later this year. That one has a scuba diving theme, and is set partly in Mexico. You can tell I have a lot of fun researching my novels! Beyond that, I’m in the proposal stage with a couple of books, so I’ve got plenty to keep me busy this year.

5) Parting comments?
I hope readers enjoy Third Time’s a Charm. I have to say, the ending of this book is one that I’m really happy with. I always pay extra close attention the last line of a book, because I want to leave readers with a satisfied feeling. And since this book concluded a series, I wanted that last line to be really special. I prayed about it, and wandered around the house mumbling to myself. The words finally came, and it was one of those moments a writer loves, when you type them and then stare at them on the screen with chills zipping up your spine. I think it wrapped up the series perfectly!

6) Where can fans find you on the internet?
My website is www.virginiasmith.org. My blog is integrated in the website, under the tab called Ginny’s Journal. (I call it a Journal so people won’t have expectations of daily posts!) I also spend far more time than I should on Facebook at http://www.facebook.com/ginny.p.smith
- January 12, 2010 29 comments: