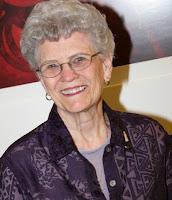 Publisher: This book is published by Realms Fiction Division of Charisma Media

Cover blurb: Libby ran away from an abusive father and life in a saloon straight into the arms of a deputy sheriff. Can Cory forgive her past and give her the life and love she’s always wanted?

1) How did this story come to you?
The forgiveness for a lifestyle unacceptable to a Christian parallels my own journey to forgiveness toward my brother and his lifestyle of sin and degradation.

2) Tell us about the journey to getting this book published.
Actually, this one was easy as it is the fourth book in the Seasons of the Heart series. My editor liked the concept of the story as presented in the proposal.

3) Tell me three things about yourself that would surprise your readers.
Well, they might not know I was in nursing school before changing my major and going into Home Economics. They also might not know I have a bum knee from playing tackle football with the boys when I was fourteen. I also sang in a concert at Mozart’s concert hall, in Salzburg, Austria.

4) What are you working on now and what's next for you?
I am working on a new series set in the years just after the Civil War. The first book is loosely based on my own great-grandparents and their love story. I did a lot of genealogy research and what I found led me to writing the story of my great-grandfather and his journey home from the Civil War in 1865. He and my great-grandmother Sally were married in June of 1865. When we visited the church where they were married, and I read a letter he had written to her, I knew I just had to write it. I used their names in my book as a tribute to them.

5) Parting comments?
Thank you for having me as a guest. I am still amazed even after three years that I will have ten published books when my Christmas one is released in September.

6) Where can fans find you on the internet?
http://www.marthawrogers.com/  and on the blog: http://www.justthewritecharisma.blogspot.com/