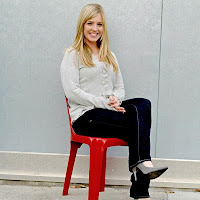 Bethany Light is the daughter of a minister who can’t forgive her father for running off with the church secretary. She goes to her own pastor for counsel, never expecting to fall in love with him. To make matters worse, she’s personal training his fiancé in preparation for the big day and somehow ends up in their wedding.


Refusing to make the same mistake her dad made, Bethany tries to focus on fixing her family rather than face her own issues. How could a household that used to have it all together have fallen so far from grace? And how can she keep from following in her father’s footsteps when it feels so right?
1) How did this story come to you?
I had the pastor of a huge church fall into my arms sobbing after confessing a nine-year affair, my mom once caught our pastor in a phone sex scandal, and my dad took over as pastor of a church where the previous minister had run off with the church secretary. The subject was everywhere around me except in the book stores. It's sad. It's real. And it hurts a lot of people. So I did what I do best--I made the tragic entertaining with the hopes that the deep truths will shine through.


2) Tell us about the journey to getting this book published.
My agent at the time loved Lighten Up. While she shopped it, I decided to whip up a proposal for the Love Finds You series. When she called with good news, I expected it to be the sale of Lighten Up. It was not. Love Finds You in Sun Valley, Idaho released in 2010, but Lighten Up didn't find a home.


As an author, I'm often surprised by the reactions my writing gets, and this was one of those times. I labored over this story. I poured my heart into this story. But the other story sold. Maybe because of the "taboo" content in Lighten Up. Maybe because it was too outside the box. Maybe because it's not as good as I think it is. I don't know.


But through marketing Love Finds You, I got to know the manager for the local Family Christian Stores. When he told me he wanted to start a small press who published the kinds of books that the bigger publishers wouldn't touch, I submitted Lighten Up. And he loved it enough to sign me to a three book deal.


It's a learning experience for both of us. I'm just glad the story is out there. And that he supports me even though I'm no superstar.


3) Tell me three things about yourself that would surprise your readers.
First, I'm also an aerobics instructor--well, maybe that's no surprise since the book mixes fitness with faith, but it's my passion aside from writing. One demands that I keep my "butt in chair" for long hours, while the other forces me to move it. Probably a good balance.


Second, my husband left me after I sold Love Finds You in Sun, Valley, so I was writing the romance novel while my own marriage was falling apart. After that I decided I never wanted to write romance again. But then I met the most amazing man who showed me how powerful love really is. I'm back, and I know my writing is going to be better than ever because of what I went through.


Third, I wrote about forgiving an adulterer in Lighten Up before I went through the divorce. I read it again after the fact and got a lot out of it. Sometimes, my writing is more healing for me than anyone else.


4) What are you working on now and what's next for you?
Well, for Endurance Press, I'm writing two more books featuring Bethany's cousins: Shake it Up and Making Up. Besides that, I just finished Romancing the Throne, a fast-paced, light-hearted romantic suspense that finds Jacqueline James on the verge of becoming a modern day princess until the prince hires a P.I. to do a background check and discovers her father is a fugitive from the states. Determined not to let her fairytale fall apart, Jacqueline hires the P.I. to help her prove her father's innocence. Together they elude press, bounty hunters, and the Miami P.D., finding the truth and freeing Jacqueline for marriage to the future monarch...except now Prince Charming doesn't compare to her knight in shining armor.


5) Parting comments?
May the God of all grace…restore you and make you strong. --I Peter 5:10


6) Where can fans find you on the internet?
I have a blog that was started to help bring healing to unloved wives, but now it's for anyone who believes in the healing power of love. Hope to see you there. http://angelaruthstrong.blogspot.com