Trish Perry's TOO GOOD TO BE TRUE 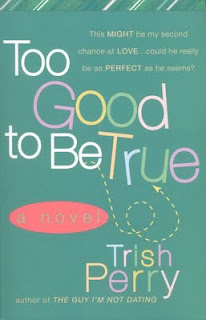 1) How did this story come to you?
I actually wrote Too Good to Be True before The Guy I’m Not Dating. I had just finished writing an intense supernatural thriller and needed to write something more light and fun. I wanted Ren, the heroine, to be funny but somewhat vulnerable emotionally. I knew her story would have much to do with our timing versus God's. I had specific romantic encounters in mind for her and Tru, the hero. The more serious facets of the story—surviving divorce, infertility, trying to adopt, and honoring one's humorously manipulative parents—just started floating around in my head while I folded laundry, applied my makeup, drove to the grocery store. As often happens, the random ideas settled into place once I sat down at the computer and got to work. That "settling" is one of God's many blessings during the writing process—great fun!
2) Tell us about the journey to getting this book published.
As I mentioned above, I had already written a book (still unpublished) before I started Too Good to Be True. I was four chapters into Too Good when I entered a writing contest with the first three chapters. The judge was a literary agent who awarded me first place and asked the contest coordinator for my contact information. I was thrilled to sign on with her! Once I finished the manuscript, she began shopping it to various houses until we received an offer. In fact, because I immediately began writing The Guy I’m Not Dating once I finished Too Good to Be True, my agent was able to get me a two-book contract. So it’s in a new writer’s best interest to keep on writing, even after that first manuscript is done and out there. That first contract came about after I had been seriously writing for about ten years.
3) What do you love most about being a writer?
I feel I’m doing what God created me to do. This isn’t a money-making endeavor by any means—not for the majority of novelists, anyway. And this certainly isn’t the path to fame. But when I hear from a reader that a particular book of mine was exactly what God wanted her to read at that point in her life? It doesn’t get any better than that. A total blessing.
4) What frustrates you about being a writer?
Definitely the blank page. Once I get started, words flow. But it can be such a struggle to get those first few words down. Lately I’ve been doing a bit more writing by hand than I usually do. I’m finding I don’t censor myself as much when I write by hand, and I love sitting down to the computer afterward and already having something to slap down on that page.
5) Tell me three things about yourself that would surprise your readers.
I used to sing in a rock band. Loved it.
I can’t swim. I don’t mean I’m not a strong swimmer. I mean it’s curtains for me if I get in water over my head.
I have a black belt in Tae Kwon Do.
6) What are you working on now and what's next for you?
I’m excited to be writing my next contemporary romance series, the first book of which probably won’t release until early 2011. The Tea Shop Series is set in historic Middleburg, Virginia. Each book will involve a different set of characters. The first book, The Perfect Blend, is about a young woman who burns all of her bridges and dashes to Middleburg to elope with her fiancé, only to find nothing is working out as she expected.
7) Parting comments?
I invite your readers to stop by my blog at http://www.trishperry.com/. I typically interview two novelists a week, and they give away a signed copy of their current book and talk about their novels, their lives, and the craft of writing.
- November 20, 2009 No comments:

Email ThisBlogThis!Share to TwitterShare to FacebookShare to Pinterest
Labels: Book Review, Trish Perry; Too Good To Be True 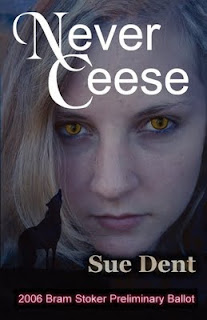 A determined young werewolf acting on her long-held wish to free herself of her curse, teams up with a skeptical vampire who can no longer admit that having his curse removed is something he wants.Will Cassi Felts be able to help them, as her grandmother implored her to do? or will they suffer at the hands of a radical and evil stem cell researcher?
Interview with Sue:
1) How did this story come to you? It’s always been there. Stories are a part of who I am. This one is no different. I do so love the vampire and werewolf genre though and felt it a wonderful place to start. And for the record, my vampire and werewolf story was out before Twilight so it’s not a copycat. I have many Twilight readers as fans though and many readers who don’t like Twilight.
2) Tell us about the journey to getting this book published. I finished my MS in October of 2006. I solicited and found a freelance professional editor that same month. She edited my work with a guaranteed 2% error rate. A publisher I found on WritersMarket.com took an interest right away when they saw they’d have little to do, in other words nothing other than printing 5000 copies, to get my work ready to be published. I did the cover art as well (I’m not bragging, I’m just saying. I’ve a degree in Fine Arts. I did the cover.)
My first publisher went under though and sold all of their stock to a liquidator. I republished my debut novel, Never Ceese through my own publishing company to keep it alive. Please purchase the paperback as I make nothing off the hardback. Forever Richard, the second in my Thirsting for Blood Series was picked up by another non-affiliated Christian publisher, The Writers’ Café Press, who also publishes Frank Creed’s cyber-punk novel Flashpoint and Susan Kirkland’s military novel, Fair Balance along with several other titles respectful of, but not limited to, a Christian audience. They’ve been great support and took my series up right away. Thanks to their fine editing, Forever Richard garnished a book blurb and resounding review from the British Fantasy Society.
3) Tell me three things about yourself that would surprise your readers.
1. I don’t think anything about me surprises my readers. LOL I am who I am (and what God made me) they seem to be okay with that.
2. Okay, here’s one. I was once a professional Foosball player, meaning I made money playing Foosball. I won Women’s Doubles in 1992 at the National Finals in Minneapolis with my partner Jackie Gummeson and then took first the next year in Designated Mixed with Russ King putting the number one player in the world out of the event early. Actually I put him out every time I played him in Designated Mixed, where the girl has to play front (you have a back player and a front player unless you’re playing singles.) My Snake Shot was unblockable most of the time. But to be fair, I’d never be able to beat World Champion Todd Lafreddo any other way. He is a master of the game and always will be. Good times. J
3. I’ve never read any of Anne Rice’s vampire books and never had a desire to. I know, weird, right? I think perhaps what sealed it for me was her getting her start writing erotica under the pen name A. N. Roquelaure. Fine if that’s what you want to write, and she clearly did a fabulous job, I just couldn’t see her moving far from those roots in her vampire books. Hey, I was a kid at the time. My Momma would’ve skinned me if I would’ve brought something that suggestive home. After all, my granddaddy Lawler was a definitive Southern Baptist preacher. Mom did let us watch Dark Shadows though. That show was a huge influence for me even though it “skeered” me at times. LOL I was somewhere around ten or eleven. I LOVED Barnabus Collins, the vampire.

4) What are you working on now and what's next for you?
I just happen to be working on the third installment in my series entitled Cyn No More. It too will be written for general market readers. I’ve a contract with The Writers’ Café Press to write five more speculative titles, as this is what they specialize in, but I am open to hearing from any publishers interested in less speculative work. Hey, an author has to earn a living and writing is what I do. I’ve got several MS’s that aren’t nearly as speculative as what I’ve been writing.
5) Parting comments?
I’d just like to say a “ginormous” thank you to all my Christian readers, affiliated and otherwise, for all your support. How wonderful that you found something redeeming about my stories and are ready to shout about it! It’s really good to have your support. I THANK you! An author can’t make it without readers and we absolutely can’t make it without industry support. ;)
6) Where can fans find you on the internet?
Have you googled Sue Dent lately . . . or maybe that’s just me that does that. LOL Oh wait, you meant where can someone find me on the web. Here you go: http://www.thewriterscafe.com/ http://www.thewriterscafepressauthors.blogspot.com/ http://www.neverceese.com/, http://www.foreverrichard.com/, http://www.suedent.blogspot.com/, I’m also on Facebook and of course I’m on http://www.shoutlife.com/ a Christian oriented social network. Richard the vampire from my stories, aka Stevie Mac, is part owner of ShoutLife and the whole team there did the official book launch for Forever Richard in January. Those are the main spots.
- November 16, 2009 2 comments:

Disclaimer: This is by no means a full list of all contests offered. I do not endorse or recommend any contest, but provide these dates for information purposes only. Do your own research before entering any contest. Dates are always subject to change by contest chairs.
- November 16, 2009 No comments: