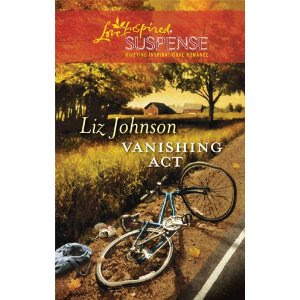 We're happy to have Liz Johnson with us today talking about her book, Vanishing Act. To learn more about Liz and her book, read on!

1) How did this story come to you?
The hero of this story, Nate Andersen, is a minor character in my first novel The Kidnapping of Kenzie Thorn, and I was really excited to get to tell his story. And while the town is fictional, it was great to set the story in Colorado, where I lived for almost four years.

2) Tell us about the journey to getting this book published.
The road to publication on this book was a blast! I wrote the book at my own pace because I wasn't under contract on it yet, and when I was done I sent it off to my editor. We'd talked a bit about it as I was working on it, but she hadn't seen any sample chapters or anything. While I'd love to say a few weeks after sending it in, my editor bought it, that wasn't quite the way it went. She asked me to make some changes, which I was happy to do. When I sumbitted the second time, I sat back and waited ... sometimes not so patiently. Then at the ACFW conference in Denver last year, I had a chance to speak with the senior editor for the Love Inspired Suspense Line. About two weeks later my editor called and offered me a contract. And the rest is editing history.

3) Tell me three things about yourself that would surprise your readers.
Three things! I don't know if I have three surprising things. Let's see ... I won my fantasy football league last season, I love nearly everything to do with the Civil War era, and I didn't learn to ice skate until I was 25 when I took lessons through the city of Colorado Springs.

4) What are you working on now and what's next for you?
Right now I'm working on a few proposals for new ideas, including a possible series about military for Love Inspired Suspense. I just finished my third novel for them, which is due out in March 2011. Code of Justice features a Heather Sloan, one of the minor characters in Vanishing Act. Heather's sister is killed in a helicopter crash, and Heather sets out to track down the drug ring that brought the helicopter down.

5) Parting comments?
Thanks so much for having me! It's a pleasure to be here, and I appreciate the support! 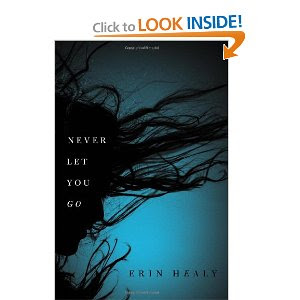 We're happy to have Erin Healy with us today talking about her book, Never Let You Go. To learn more about Erin and her book, read on!

1) How did this story come to you?
NLYG is a supernatural thriller about the terrifying effects of a parent’s bitterness on her dearly loved child. The idea came from real-life observations about how families unwittingly pass bitterness through generations. I was curious about why that happens and what it takes to break the cycle.

2) Tell us about the journey to getting this book published.
My journey has been a backward, “inside-the-industry” journey from career editor to author. I’ve worked with dozens of talented novelists and have been one of Ted Dekker’s editors for years. He invited me to co-author some books with him (we wrote KISS and BURN together). Our agreement with the publisher included the opportunity for me to write at least three more novels on my own.
3) Tell me three things about yourself that would surprise your readers.
Daniel Boone is my great (to the eighth or ninth power) uncle. I’m a terrible speller. I’ve walked on the dreary English moors that inspired Wuthering Heights (and caught a miserable cold as a result).

4) What are you working on now and what's next for you?
THE PROMISES SHE KEEPS comes out in January 2011. It’s the story of two women who are seeking immortality, and the autistic artist who shows them the unexpected way.

5) Parting comments?
I’m über-interested in stories about ways in which our spiritual and physical lives intersect. If you are too, look me up on Facebook (www.facebook.com/erinhealybooks) and “like” my page, then join in the discussions there about the ways God works in our lives supernaturally.

6) Where can fans find you on the Internet?
In addition to Facebook, at http://www.erinhealy.com/. You can view the video trailer for NEVER LET YOU GO and also read the first three chapters. My Web site has a place for readers to leave comments about my books—please let me know what you think of them, good or bad!
- August 23, 2010 20 comments: Links to this post 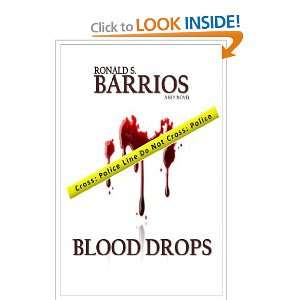 We're happy to have Ronald S. Barrios with us today talking about his book, Blood Drops. To learn more about Ronald and his book, read on!


1) How did this story come to you?
I started with a concept of the main character and wanted to introduce him to the world so I just put him in a situation and it developed from there. First came chapter one, then chapter two grew out of chapter one. Chapter three out of chapter two and so on.

2) Tell us about the journey to getting this book published.
I was told be a small publishing house that they could work with me if I added profanity and sex to my novel, there is none, but I refused to so I went independent as not to have to compromise my beliefs as a Christian.

3) Tell me three things about yourself that would surprise your readers.
1. I like like Frank Sinatra.
2. I love Disney cartoons.
3. I worry about readers enjoying my novels. I don't want to disappoint anyone.

4) What are you working on now and what's next for you?
I'm working on the next book in the Rey series and plan on putting that out in the spring of next year. I'll reveal more on my website.

5) Parting comments?
I just want to thank you for taking a chance on me. I know you normally don't interview independent authors and this means a lot to me. I greatly appreciate you and won't forget this. Thank you, K. 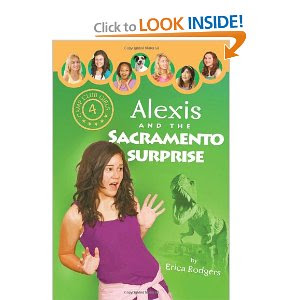 We're happy to have Erica Rodgers with us today talking about her book, Alexis and the Sacramento Surprise. To learn more about Erica and her book, read on!

1) How did this story come to you?
I was really excited when my editor told me that "my" Camp Club Girl, Alexis, was the girl from central California. I grew up is South Lake Tahoe, California and spent a lot of time in Sacramento, so a lot of the things Alexis does in the books are things I did as a child. Except for investigating animatronic dinosaurs. I can honestly say I've never done that.
At one point in this book, Alexis faces a school board that bans field trips to a nature park because it has "Christian elements." I chose to write about this because many students deal with adults who challenge their beliefs. I wanted to encourage them by portraying a young person who stated her views respectfully and was not shaken when others might not agree.

2) Tell us about the journey to getting this book published.
I submitted a different book to Barbour. It too was a girl's mystery, but it wasn't a good fit for them at the time. Later, they contacted me and asked if I would like to write for the Camp Club Girls series. It has been a great opportunity and a lot of fun.

3) Tell me three things about yourself that would surprise your readers.
I color when I'm stressed. Yes--in coloring books. Try it. It works.
I am in love with super-heros. Both the literary and the comic book kind. From Aslan to Iron Man, they have me wrapped around their fingers. :)
Writing villains is really fun, and sometimes it's easier than writing about the good guys. Maybe that's because they're not perfect...and no one expects them to be.

4) What are you working on now and what's next for you?
I am currently working on a young adult science-fiction novel called Breaking Bedlam: the Chronicles of Jim Christmas. I am absolutely in love with these new characters (what author isn't?) and can't wait for them to find a publishing home!

5) Parting comments?
I am so blessed to be able to write. In the words of my husband, I get to make things up for a living. No cubicle, no reports to file...sometimes no money, but I'm doing what I love. :) To God alone be the glory! 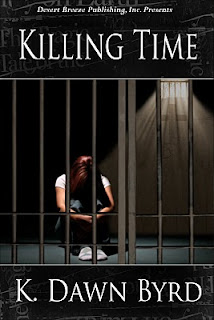 Mindy McLaurin, thinks it's the end of the world when she's incarcerated on trumped-up embezzlement charges. While in jail, she investigates the death of an inmate who allegedly died of an overdose. Mindy suspects foul play when her cellmate dies and she learns that both women had ingested the same drug. Mindy trusts no one, including Drew Stone, the handsome counselor she can’t stop thinking about. She faces many challenges, including constant interrogation by the Major and emotional abuse from the other inmates. Upon release, someone is stalking her and framing her for the murder. Can she prove to Counselor Stone that she’s innocent of all charges before she loses him forever? 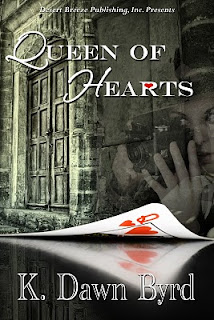 How to read a Kindle book without a Kindle

You can read ebooks without a Kindle or ereader right on your PC. The Kindle software is free. It'll change the way you read forever. Follow the link below and download the Kindle app to your computer. You can then download athe first couple of chapters of Queen of Hearts for free. Plus, there are dozens of free books on Amazon too, some by best selling authors. It's fun and it's easy and in many cases, you can sample a book before you buy. Check it out!

For more information about Queen of Hearts, click on a link below. At Amazon, you can download the first couple of chapters for free. At Desert Breeze, you can read the excerpt.