We're happy to have Allen Steadham with us today talking about his book Mindfire. To learn more about Allen and his Christian Superhero Thriller, read on!

Back cover blurb
"For unto whomsoever much is given, of him shall be much required."
Leia Hamilton can move things and set them on fire with her mind.
Leia's father and step-mother tried to hide their past: a time when they were part of a team of superheroes. But despite being disbanded for over twenty years following a series of tragedies, their problems were passed to their children and Leia finds that her future collides with their past.
In the diverse world of human and superhuman, heroes and villains, friends and enemies, some of Leia's choices have terrible consequences. For Leia, this leads to a personal crossroads and a search for redemption.
Not your normal superhero novel, Mindfire isn't about secret identities, costumes, or evil plots endangering the world. Instead, self-discovery and adaptation is at the forefront as the reader follows the lives of the characters who are unafraid to show love and explore spirituality.
Can redemption and renewed grace weather the flames of absolute power and superhuman strength?


Please give us the first page of the book.

SWEATING FROM HER BRISK WALK across the Digby College campus
in record-breaking near-ninety-degree July heat, Leia Hamilton dragged
herself into an empty seat towards the back of the large Jason V. Frederick
lecture hall, which wasn’t well-lit or properly ventilated. The building itself
must have been at least twenty-five to thirty years old. The acoustics carried
well enough but also made it seem like all sound escaped from a human-sized
tin can. Students were always tempted to sleep but their success often
depended on the teacher.

Professor Angela Merrick, whom Leia had nicknamed “Professor Doom,”
scowled and deliberately made direct eye contact with Leia but said nothing,
continuing her lecture. The professor radiated confidence and something else,
Leia wasn’t sure what. The professor’s long black hair was often worn in a
bun like today but sometimes she wore it down. Leia believed the professor
would be very beautiful if she didn’t always project a certain amount of
tension. It had given her worry lines that made her look a few years older than
she probably was.

Thirty minutes later, Josh Manning saw Leia escaping her first class of the
day. Mentally noting her distressed expression, he whirled her around and
kissed her passionately in front of the other class escapees in the hallway. He
was red-haired, even taller than Leia and lanky. He also had more than a bit of
Southern charm to accompany his slight Alabama drawl. Suddenly, he pulled
back, confused and concerned.

“Your skin is, like, really hot!” Josh put his hand on her forehead. “You
have a fever or something?”
“I’m fine,” Leia pulled back and glared at Josh. “Now what are you doing?
You said you’d keep things mellow on-campus!”
“You looked like you needed cheering up,” Josh said.

Leia facepalmed. And a moment later, she grabbed his arms in a rage.

“What is wrong with you?” Leia screamed. “Save that stuff for when
we’re alone!”
“Oh yeah, that’s subtle,” Josh replied. “Do you think anyone didn’t hear
you just now? All I did was kiss you!”

Please tell us five random things we might not know about you.
1.     I am interracially married (my wife is African-American)
2.     I’ve played electric bass guitar since 1986
3.     I take sky pictures with my iPhone & post them on Instagram and Facebook
4.     My wife and I have the same birthday (5 years apart)
5.     I studied journalism in high school and college

Why did you choose to write this book?
This was my first full-length, completed novel. I chose to undertake it for National Novel Writing Month (Nanowrimo) in November 2013 and completed the first draft in three weeks. I asked the Lord to bless me with inspiration and he did. I took characters and story elements from original superhero comic book I wrote and drew, starting at age ten. I continued that comic into my twenties, finishing it in my thirties. But now, I wanted to only write Christian fiction. And the Lord took my familiarity with these characters and their histories to craft a story in the present day, a story that would point towards Him. A redemption story. So that’s what Mindfire is. It’s all to God’s glory.

What one thing about writing do you wish non-writers would understand?
It’s a process. No one starts out a great writer. People may have great ideas but it takes time, practice and mistakes to get better. A writer is always learning and growing. A writer should never think they’re “good enough,” they should keep pushing themselves. That’s what makes a person a writer.

What is the toughest test you've faced as a writer?
Depicting salvation. It’s one thing to show a character going through trials or realizing that they need God and His Son, Jesus Christ. But to show that person actually ask for and receive the greatest Gift ever bestowed, it takes me as a writer submitting myself to this Holy God and allowing Him to show me the way to depict it. Salvation is the same but the way people approach, perceive and accept it is different each time. It’s a very personal experience and that has to be respected and shown properly. Otherwise, one runs the risk of making the Divine seem commonplace, which it is not and never can be. It is extraordinary.

What do you hope readers to take away from your novel?
While it is very normal for people to try and solve their own problems, the only lasting solution is Jesus Christ. He is the ultimate superhero who died for our sins to give us eternal life.

What accomplishment(s) are you most proud of, writing-related or not?
I’m proud of completing Mindfire. It is the culmination of a lifetime of character building while also saying goodbye to a part of my past in a satisfying way. It’s knowing that theses characters’ stories may be able to help someone who may not even know they’re seeking the Lord. Or it may bring peace to someone who is struggling in their walk with Christ. I don’t know how the book will be received but I know what the Lord can do. It’s an honor to be used by Him for anything.

What do you do for fun when not writing?
I like to watch Star Trek (all series) and foreign dramas. My oldest son and I go to the movies somewhat frequently. My wife and I love spending time together. I also enjoy doing things with the whole family.

What are you working on now?
I’m working on the first book in a Christian steampunk trilogy. 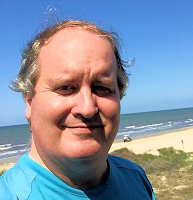 Bio
Allen Steadham created comic books and webcomics before he started writing novels. He has been married to his wife, Angel, since 1995 and they have two sons and a daughter. When not writing stories, Allen and his wife are singers, songwriters and musicians. They have been in a Christian band together since 1997. They live in Central Texas.