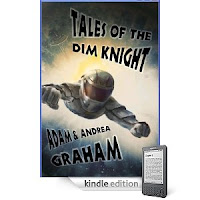 We're happy to have Andrea Graham with us today talking about her book, Tales of a Dim Knight. To learn more about Andrea and her book, read on!

Cover blurb: In Tales of the Dim Knight, mild-mannered janitor and superhero fanboy Dave Johnson gets all his wishes at once when an alien symbiot gives him supernatural powers. But what's he to do with them? Follow the zany adventures of the clueless custodian as he fights crime and corruption while trying to keep his family together and avoid being sued for copyright infringement.

1) How did this story come to you?
My co-author came up with the concept for this novel after reading Who Needs A Superhero? By H. Michael Brewer.

2) Tell us about the journey to getting this book published.
We had shelved it as a novel, deciding against shopping it to a publisher, and opted instead to serialize it along side three other stories on our own website, Laser & Sword Magazine. A friend who happened to be a publisher read it, loved it, and asked to buy it.

3) Tell me three things about yourself that would surprise your readers.
Not sure if anything would. I tend to be a fairly open book. I’ll try, though. I was on the drama team in high school and did great despite suffering terrible stage fright. I like yellow and pink more than I do purple. I love lavender and lilac, but prefer bright, light colors to dark and drab. One more. Uh—I’m an ENFJ (Extroverted, Intuitive, Feeling, Judging) with no sense of time. LOL.

4) What are you working on now and what's next for you?
I’m working on the fourth book of an unpublished low-tech sci fi series set in a alternate universe with a topsy turvy history as it wants to veer left when we veer right. Examples: historically matriarchal, the ark landed in the Rocky Mountains, Jesus was never born there (death came to them from our world, Pandora’s box style, so salvation does also), the Union of the Nations (i.e. the US) is an 1800 years old country rather than a young one, the dark-skinned race enslaved the light-skinned race, and the Union lost the civil war and the West. Due to the monarchy, sword and crossbow play, pet dinosaurs called dragons, etc., most who’ve offered an opinion regard it as fantasy.

Adam most recently has written a Sci Fi short story setting the parable of the unjust judge on a twenty-third century space station, casting the persistent widow as a gray-skinned hominoid alien with a frog-like tongue. I added the tongue in to distinguish her from Zolgron’s species in Tales of the Dim Knight. We help ourselves to each other’s work routinely. He also has ideas for two more books set in my universe as referenced above.

6) Where can fans find you on the internet?
I mouthed off with Christian advice and book reviews at my blog, Ask Andrea, and put out my for editor-for-hire sign along with free writing tips at http://www.povbootcamp.com/. You can read about Tales of the Dim Knight at Splashdown Books or preview the first four chapters on your ebook reader of choice at Smashwords. Or check out Adam’s blog or http://www.adamsweb.us/.
- November 22, 2010