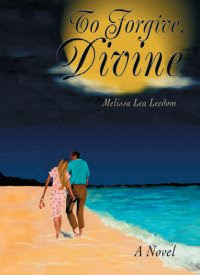 We're happy to have Melissa Lea Leedom with us today talking about her book, To Forgive, Divine. To learn more about Melissa and her book, read on!


1) How did this story come to you?
I think all stories start out with a couple of “What ifs…?” I worked on the Board of Directors for Habitat for Humanity when I lived in Alabama. The Board President who was rolling off just as I was coming on was a man I greatly admired, but who I could see had real privacy issues in dealing with being a pastor. What if, I wondered, this pastor were single and he and a woman equally reluctant to be the subject of public scrutiny, suddenly found themselves alone together in a restaurant—just as one of the biggest gossips in their church is passing by? What if every circumstance seems, at one and the same time, constantly to throw them together when seeing each other has suddenly become awkward and painful? To Forgive, Divine, as its title implies, explores how two people can find their way back to each other through forgiveness.

2) Tell us about the journey to getting this book published.
Having attended a number of writers’ conferences at which the constant refrain was how next-to-impossible it is for an unknown writer to find an agent or get published, and having also been told that even if one DID manage to get published, one would still be largely responsible for marketing the book, I thought, “Well, if I’m going to do my own marketing anyway, let me just go ahead and publish it myself.”
And To Forgive, Divine has been received by readers and reviewers just as it would have been had it come from Harvest House or Tyndale (check out the reviews and reader comments on my website). I sell and sign books at book stores and other author events, I speak at writers’ conferences, and I have people contact me via my website, just like a “real” author. While I haven’t made the New York Times Bestseller List, To Forgive, Divine is still selling, six years later.


3) Tell me three things about yourself that would surprise your readers.
1. Even though I’m very much a “word” person, I minored in math; this was enough to allow me to teach math at community colleges for 11 years.
2. I’m a “late bloomer” who once despaired of ever earning a college degree. I now have a Master’s degree in English. Never say never!
3. I was heavily influenced by Jane Austen in writing To Forgive, Divine. See if you can see some of her plotting elements (Pride and Prejudice, Emma, Persuasion) in the story.


4) What are you working on now and what's next for you?
I wrote a small book called The Story of the Bible for a group of teenage girls I work with at my church, which I subsequently posted on my website. Last fall, with the help of two women from my church, I translated it into Spanish, and that version is also on my site. I recently translated it into Portuguese for our minister of youth, who is fluent in the language and who is going to be conducting a mission trip to Brazil this summer. As soon as he has proofread it for me, I’ll prepare hard copy books for him to bring with him, as well as post it to my site. My goal is to have it translated into French and Arabic by the end of the year. It’s by far the most visited part of my website.
Also, there are two sequels to To Forgive, Divine planned.


5) Parting comments?
To Forgive, Divine is the kind of book that makes a great gift to the non-Christian reader. Anyone who loves a good romance will love it. But I’ve had readers, both Christian and non-Christian, tell me they appreciated how the story gets the message of Christianity across without being preachy. And isn’t getting the message of Jesus across really the ultimate goal of inspirational fiction?